There’s Nothing Easy About Cutting The Cord And Running Screens, All Day, Off Batteries 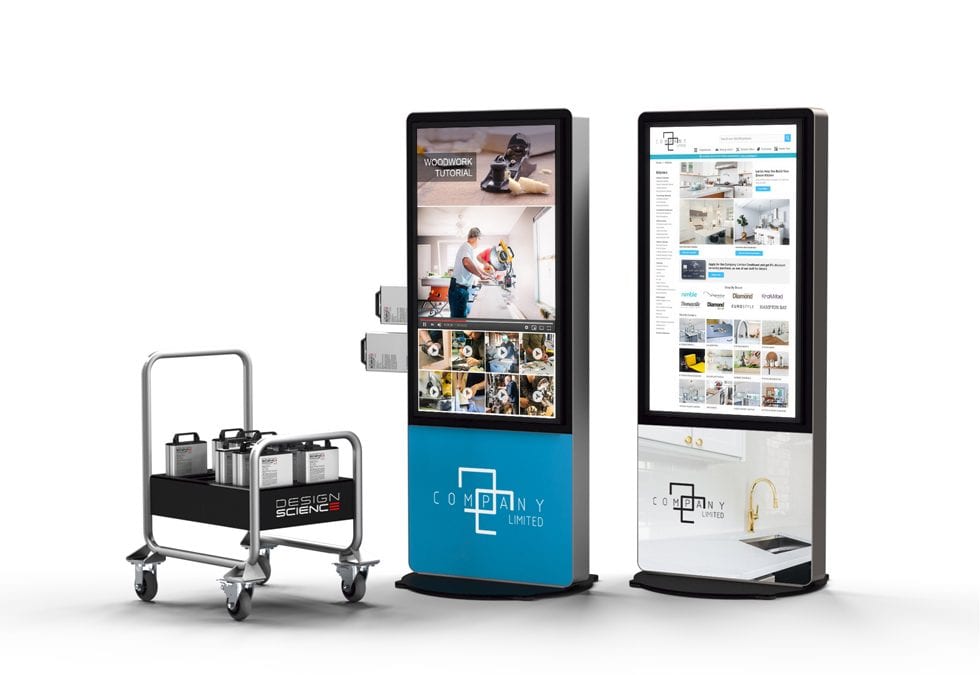 This article was originally published on Sixteen-Nine by Dave Haynes on July 30, 2020.

Running a big digital display on nothing but batteries, for hours, is no mean feat. Trust me on this, as I’ve spent 13 years with my team figuring it out.

It’s always been a simple ask – an LCD screen that could be placed in a walkway or entrance, or on a merchandising table, without running a power cord that looked ugly and likely presented a tripping hazard.

Without a power cord, using a rechargeable battery system that could last a full retail operating day, it’s the sort of marketing and messaging machine that could be placed wherever it might have the most visual impact.

But developing a rechargeable display that’s reliable and affordable, and also looks appropriate for the environment, has been anything but simple. There are countless stories through the years of end-users who bought cord-free solutions from displays that didn’t work well, didn’t last, or presented serious fire hazards.

We figured it out, because we had customers asking for a solution, and also because we thought we had the mechanical and electronic design chops to pull it off. After all these years, and a lot of hard-earned lessons, we’re in a position to share our insights, and let both solutions providers and end-users know that what didn’t really work for the longest time, now does.

Back in 2007, a big retail customer came to us, asking if we knew of anyone who could provide a battery-powered solution for some of their in-store LCD displays, so that they could do free-standing feature merchandising displays that didn’t come with a troublesome power cord.

We didn’t know anyone, but decided to take a run at the concept ourselves. After developing a solution that used off-the-shelf gel-acid batteries, we then went back to the retailer with our concept.

They liked it, but they said the cost would have to be picked up by one of their product vendors. If you have been around digital signage for many years, you know just about everything associated with the display technology solution bundle costed far more than it does now.

Price-driven rejection didn’t put an end to our curiosity. We stuck with it, testing a large number of concepts that used these gel-lead-acid batteries. But they were impractical – too bulky and heavy, and not engineered to provide the years of operating lifetime needed.

Happily, more affordable lithium ion batteries entered the market, so we switched our R&D focus to that technology. We had some success developing a variety of displays running off these batteries, but it was still early days – the electronic components were power-hungry and those lithium ion batteries remained expensive.

But … customers and business partners kept asking about battery-based displays, so we kept working at refinements. Fortunately, advances like LED backlighting for screens, and solid state components like storage, have dramatically reduced power demands, making it far easier to drive a screen for the 12 or more hours retailers and brands needed.

Rather than buy from third-parties, we started working on our own battery systems – looking for the technology mix that offered long life cycles and highest safety levels.

We settled on two categories, both involving our patent pending battery cassette units:

Stationary cassettes – where the cassettes are installed in the display units on-site, and those units are then wheeled over to AC outlets for overnight charging;

Removable cassettes – where the battery packs are removed on a daily basis, collected in a cart if there are several, and loaded in a rack-mounted charger. They get returned to the displays the following day.

Years and years of refining both the technology and the industrial design for our digital signage products have taught us a few things.

First, you have to bridge practicality and budget with something that has appealing display aesthetics. In other words, something that works well also has to look good, as many to most of the demand out there comes from design-sensitive retailers and brands.

Second, using off-the-shelf batteries and other electronic components, and then cramming them into digital displays, will not result in efficient, cost-effective or practical solutions.

Third, little things matter. Free-standing displays are tipping risks. The simple but clunky answer is to load the base pedestal with weight. The more elegant way to a sleek, stable display is math and design. We’ve also learned a lot about things like rollers and braking systems.

Our best clients, we’ve also realized, are those with battle scars – end-users who have already tried a battery-based screen solution, and suffered through things like swelling batteries, over-heating and other horror stories.

We’ve concluded, as well, that figuring out the tech side of battery-based displays is just part of the battle. You then need to adhere to a wide range of regulations and go through numerous certifications, like UL.

Eliminating the power cord unavoidably adds more to budgets – as high quality batteries are always going to cost more than a simple power cord and plug.

I always advise people to not focus their thinking purely on the initial capital costs. They need to think, as well, as about opportunity costs and the overall return. Simply put, does saving money by putting a screen off to the side, so it can be plugged in, realize the project goals? Or was it a wasted investment, because it was little seen or used?

There are many, many cases where marketers and merchandisers would really like to get screens where they can’t be missed, and are most useful and effective. You can now put out full-sized screens, like information kiosks, in mall and mass transit concourses, even in the lobbies of medical facilities and mega-churches, that will happily, capably run all day on nothing but the battery pack embedded in the enclosure.

My one parting advice for anyone looking for this kind of solution: be wary.

If you ask a supplier, and they say, “Oh yeah … easy,” ask what they’ve done to date, how they do it, and why it is easy.

Like I noted up top, getting a 43-inch screen to show bright video and other digital signage messaging, through a full retail day on nothing but battery power, is anything but easy.

Chester Niziol is the Chief Executive Officer of Design Science Corp. He is also the past President of the Association of Certified Industrial Designers of Ontario (ACIDO) and is a continuing member. Through his leadership, Design Science Corp. has become one of the pioneers in display battery technology, holding hundreds of copyrighted designs, and several industrial design and technology patents.