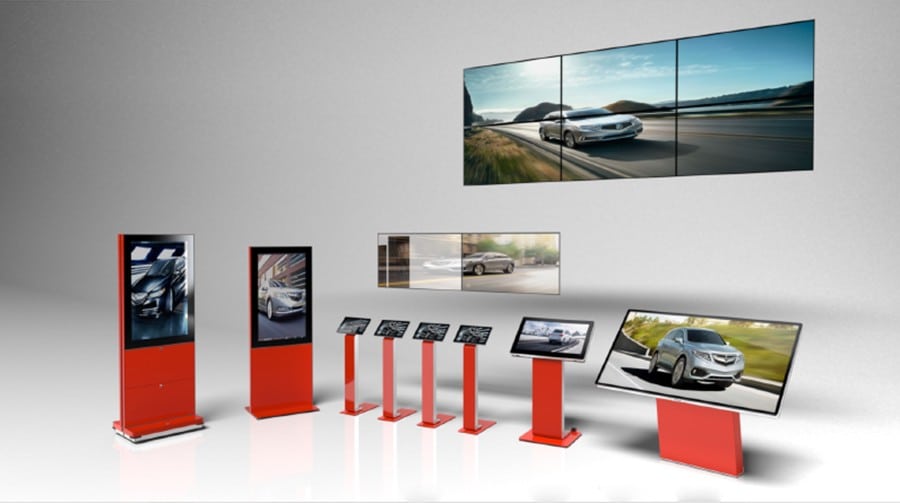 This article was originally published in Sixteen-Nine by Dave Haynes on March 21, 2017.

I was at GlobalShop about 10-12 years ago and remember seeing a small shelf-edge display being touted by a little company as the answer to getting screens in places where power was unavailable.

The power pack looked like something straight out of Roadrunner cartoon – a giant roll of rechargeable batteries all bundled together like the sticks of dynamite Wile E. Coyote seemed to get “blowed up” by with painful regularity. They did NOT look like something any sane person would use in a retail environment.

Jump ahead to 2017, and a lot has changed in digital display and batteries. A Toronto-area company I’ve known for several years is now fully ready to market large format displays as large as 46″ that run on industrial-grade, military-spec batteries for an average of 12 hours.

Design Science has started shipping several lines of large format digital signage and interactive displays that operate off rechargeable lithium ion batteries – with a target user base of retailers, event marketers that do a lot of temporary exhibits, and trade show exhibition services companies that rent anything from director’s chairs and extension cords to 4K displays to trade show exhibitors.

The pitch boils down to these things enabling marketers and exhibitors to put screens where they want them to be, without worrying about extension cord ramps, duct tape or power cords being dropped from ceilings. These things plug in like an electric car and charge back up overnight.

The LCD displays – everything from tabletop sizes to 46-inch freestanding digital posters and touchscreen kiosks – are equipped with industrial-grade, military-specification lithium ion battery modules. They are all rated for 12 continuous hours of use on one charge, including full video playback and interactive functions.

That means displays can be positioned in the best possible locations for marketing and messaging, without any worries about access to wall plugs, and without needing to run or drop unsightly extension cords. At a trade show, for example, displays can be positioned in optimal locations to run all day – without worrying about power access – and then get recharged overnight.

“We’ve put almost a decade of R&D into getting these displays to levels of performance, safety and flexibility that we know the marketplace demands,” says Chester Niziol, CEO of Design Science. “We’re specifically solving the problem of getting high impact digital communications in the optimal positions for marketers, and making those displays fully portable, so they can be repositioned on demand.”

All of the Design Science units – ranging in screen sizes from 15-inch tabletop units to standing 46-inch units can easily be moved, with the largest units fitted with lockable wheels. Though built to industrial specifications, the display enclosures have attractive but neutral designs that look good in any setting, and can be customized using print graphics.

Units ship with internal display controllers, solid state Windows 10 PCs that can run numerous digital signage or interactive applications, and battery packages with sizes tuned to the demands of the different screen dimensions.

The batteries are all based on lithium ion technology – the same family of batteries used in technologies like high-end laptops. In this case, Design Science sourced and uses military spec batteries that are also used for things like submarine torpedoes. The batteries have all the necessary safety certifications, and are fully approved for cross border shipping.

“We put a lot of work into finding the right batteries that would not only perform, but also pose no safety risks,” says Niziol. “Lithium batteries have had some bad press lately, but that’s lithium polymer technology, which is very different from what we use. Our units can ship, hassle-free and worry-free, by most common transportation modes.”

The ones that are lighting up in people’s pockets and burning down houses – used in smartphones, hoverboards, e-cigarettes and main other things – are lithium polymer.

There are standing, angled kiosk and tabletop versions of the displays. The units all support dual voltage, so they can be used in Europe, Asia and elsewhere by attaching simple wall plug adapters.

“We see a really good market for these displays for any marketer or business communicator who sees the value of using digital displays, but has been constrained so often by the lack of available power in the ideal locations,” says Niziol. “Sure, you can run extension cords, but they look terrible and they’re a tripping hazard. With these units, those issues go away.”

Niziol told me these are the 5th generation of the displays, and reflect the better part of 10 years of R&D. They are rated for 12 hours but have been getting as much as 15 hours playing videos.